During the course of a week or two, I decided to try and slap together a multiplayer game using mostly free assets from Unity© Asset Store. I was looking to do a full loot, 3D FPS RPG multiplayer game. I bought Forge Networking by Bearded Man Studios from the asset store as the multiplayer solution. Forge networking is written in c#, all source code is included, easy to get started, active Discord, documentation, videos, example projects, etc. After a year from purchasing, I am happy to see them still updating their product.

Below is a gif of the gameplay. The speed is increased to show more in a short amount of time. 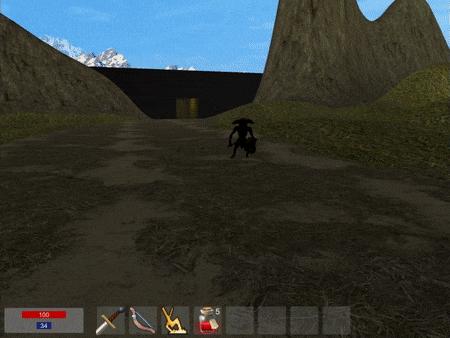 The current features in this game are the ability to use healing potions with a delay between uses, casting lighting spell, regenerating mana bar, three killable monster types, GUI with hotkey bar, multiplayer, killing of other players, ghost form when you die and the ability to resurrect at the shrine as a ghost. The project was short and sweet but furthered my understanding of how to code multiplayer elements and the host/client interaction. I also obtained a better understanding of the animation system, the use of shaders and the particle system. Since this project was so short there is not much else to share about it but I felt it was pretty cool for the amount of work that went into it.