Next comes the second game I have released on Android and Apple iOS. The game is called WHADAYA KNOW! I was contracted by the website www.easyeverydayenglish.com to make it. It is a flash card game with multiple choice answers. The flash cards are set up in levels, with each level being ten words from the sites thousands of words and definitions.

The game was made using html, css and JavaScript. I used Adobe PhoneGap which is a distribution of Apache Cordova. This software makes a web app look and feel like a native app for both Android and iOS. It is easy to use and works great.

At the time I had very little to no knowledge of html, css, JavaScript or publishing an app on iOS. Whenever I come across something in life I do not know, I just research it until I figure it out. This comes with some trial and error as well. Knowing programming really helped since most languages I come across are very similar but just have different syntax.

Below are two screenshots from the app on android. Below these screenshots are links to the store pages of the game. The game is free to play. 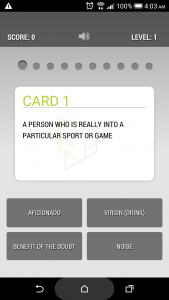 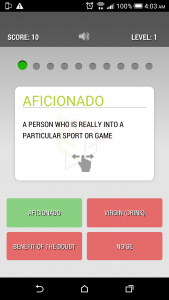 One challenge of this project was converting the data I was given by the company managing the website into something I could use for the game. I ended up writing a c# program to parse through the text file they gave me and pull out the words and definitions, while ignoring the unneeded characters, lines and symbols. After parsing, the program outputs a text file that formatted all the data into JavaScript so I could make use of it in the web app.

Below is a small snippet of the before and after of the data. The first image is the data I was given and the second is the output of the program I wrote to organize the data.