Chainsaw the Zombies is my first released game. Chainsaw the Zombies is similar to Pac-Man but instead of ghosts it has zombies and a chainsaw power-up to remove the zombies. Furthermore Instead of a fruit for extra points it has a damsel in distress. One major difference is the zombies spawn at a certain distance around the player randomly and increase in count the more time passes or the more you kill them during a level.

The game was on Xbox 360 Indie and is currently on Android devices 2.2 and up.  Microsoft shut down the Xbox Live Indie games program so the game and I believe the game can no longer be purchased on Xbox. We ended up porting the game to Android during the peer review process on Xbox. Chainsaw the Zombies remains on Android where it lives on and is free without ads. 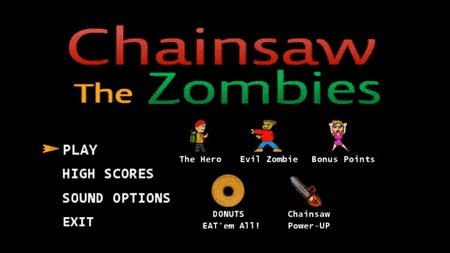 My friend and I decided we wanted to make a simpler game in order to go through the release process for a learning experience. Fortunately the past work on a previous unreleased XNA game could be used. The level editor that I showed from my previous post was used to make 10 unique levels where the difficulty ramps up through the levels.  After every 10 levels, the levels repeat, the game speed increases slightly and the wall colors change. In the past level editor project, I made the level files save in xml format which was convenient since Android can load them.

The Xbox Indie peer review process took quite some time.  I mentioned in an earlier post that the game must correctly respond to pulling a memory card out while trying to save or load a file on that memory card.  When you first put up a game for review there seemed to be a diligent reviewer ready to deny it trying this first on every game. I found it interesting that the indie games section was put to such a high standard but I persevered to get it through the peer review process.